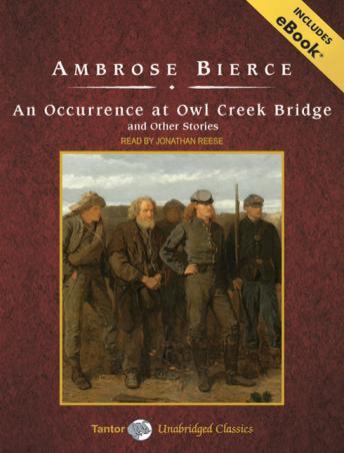 An Occurrence at Owl Creek Bridge and Other Stories

Download or Stream instantly more than 55,000 audiobooks.
Listen to "An Occurrence at Owl Creek Bridge and Other Stories" on your iOS and Android device.

Before he trailed off into the wilds of Mexico, never to be heard from again, Ambrose Bierce achieved a public persona as 'bitter Bierce' and 'the devil's lexicographer.' He left behind a nasty reputation and more than ninety short stories that are perfect expressions of his sardonic genius. This volume of selected stories represent an unprecedented accomplishment in American literature. In their iconoclasm and needle-sharp irony, their formal and thematic ingenuity and element of surprise, they differ markedly from the fiction admired in Bierce's time.

''An Occurrence at Owl Creek Bridge,'' the premier title in this collection, is one of the most widely anthologized American short stories and is considered Bierce's best work. First published in 1891 in Bierce's short story collection Tales of Soldiers and Civilians, the story centers on Peyton Farquhar, a southern planter who is about to be hanged by the Union Army for attempting to destroy the railroad bridge at Owl Creek. As Farquhar stands on the bridge with a noose around his neck, Bierce leads the reader to believe that the rope breaks and that Farquhar falls into the water below, only to escape to his farm, where he is reunited with his wife. ''An Occurrence at Owl Creek Bridge' has been lauded as an example of technical brilliance and innovative narration as well as for its examination of such themes as the nature of time and the complexities of human cognition.