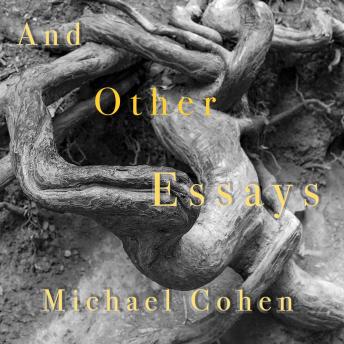 Download or Stream instantly more than 55,000 audiobooks.
Listen to "And Other Essays" on your iOS and Android device.

In this essay collection, Michael Cohen presents the odd idea of the suicide note as a writing project that can be critiqued like any other, describes encounters with illegal border crossers in south Texas, and ponders the sudden popularity of books about atheism. Books are a frequent subject here, and Cohen makes an argument for The Maltese Falcon as the Great American Novel, searches for the perfect, the Platonic, nature handbook, and compares playing golf to reading about it. Reading is, for him, as engrossing a form of experience as any other—say hitchhiking through the Southwest with an old friend, the joys of flying small planes, or the charm of studying ancient Greek while people-watching at the gym, all experiences chronicled here. He looks back at the effect a 1956 collision of two airliners over the Grand Canyon had on him as a kid fond of flying, and how he learned about the joys of good food during a wanderjahr in Europe. Many of these essays begin with a question: whether Americans deserve their reputation for materialism, why we seem to have lost the climate change battle, and whether talking to yourself might really be beneficial. Another frequent topic is how our ideal places cannot avoid being bruised by time. He looks at what happened as the Tucson bars of his college days closed or morphed into very different places. He traces seasonal changes in the desert. He notes what happens to its effect when a giant cross beside I-40 in Texas is joined by equally giant windmills. And he takes a mind’s-eye tour through Paris’s terrace cafés and their literary associations after the 2015 terrorist attack there.

Michael's previous collection with IP is A Place to Read