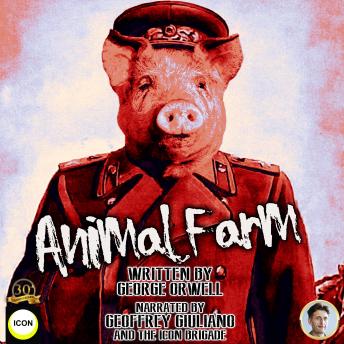 Download or Stream instantly more than 55,000 audiobooks.
Listen to "Animal Farm" on your iOS and Android device.

Geoffrey Giuliano And The Icon Brigade

Mr. Jones, the owner of Manor Farm, is a lazy drunk. The animals decide to overthrow him in a revolution that will allow them to run the farm, liberating themselves and creating a new life of equality and freedom. But they have underestimated the pigs. Napoleon and Snowball form an elite and take control for themselves, and the tyranny of the farmer is replaced with another kind of control leaving the animals again subject to a ruthless and cruel authority.

Imagined only as George Orwell could, this powerful fable is instilled with humor and an underlying urgency that makes this one of the most prescient warnings ever written.

Animal Farm is a satirical allegorical novella by George Orwell, first published in 1945. The book tells the story of a group of farm animals who rebel against their human farmer, hoping to create a society where the animals can be equal, free, and happy. Ultimately, the rebellion is betrayed, and the farm ends up in a state as bad as it was before, under the dictatorship of a pig named Napoleon.

According to Orwell, the fable reflects events leading up to the Russian Revolution of 1917 and then on into the Stalinist era of the Soviet Union. In Orwell's essay 'Why I Write' (1946), he wrote that Animal Farm was the first book in which he tried, with full consciousness of what he was doing, 'to fuse political purpose and artistic purpose into one whole'.

Geoffrey Giuliano is the author of over thirty internationally bestselling biographies, including the London Sunday Times bestseller 'Blackbird: The Life and Times of Paul McCartney' and 'Dark Horse: The Private Life of George Harrison'. He can be heard on the Westwood One Radio Network and has written and produced over seven hundred original spoken word