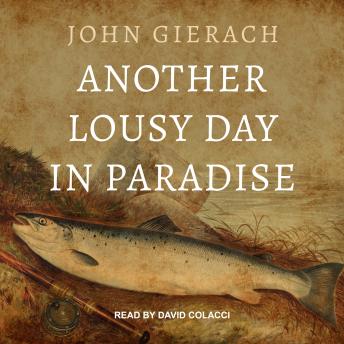 Another Lousy Day in Paradise

Download or Stream instantly more than 55,000 audiobooks.
Listen to "Another Lousy Day in Paradise" on your iOS and Android device.

Brilliant, witty, perceptive essays about fly-fishing, the natural world, and life in general by the acknowledged master of fishing writers.

'Good fishing and good writing use the same skills,' writes John Gierach, 'whether you're after a trout or a story, you won't get that far with brute force. You're better off to watch, wait, and remain calm . . . letting it all happen, rather than trying to make it happen.' As the wry and perceptive essays in Another Lousy Day in Paradise prove, Gierach knows his writing as well as his fishing.

Paradise, Gierach shows us, is relative; it can be found in the guilty luxury of fishing private waters or when one is soaked to the skin, in a small canoe on a big lake in a storm a hundred miles from anywhere, exhilarated after a day's fishing. There are also pleasures to be found in unexpected places: solitary fishing trips, fishing for less-appreciated fish like carp, or meeting a guide who at first seems like an inarticulate ax murderer but who proves to be a 'Zen master among fishing guides.' The point is to let things unfold as they will-because after all, says Gierach, 'Basically, the world is a big, dumb trout, and you're a fisherman with all the time in the world.' As Gierach fans know, this is a description of paradise.