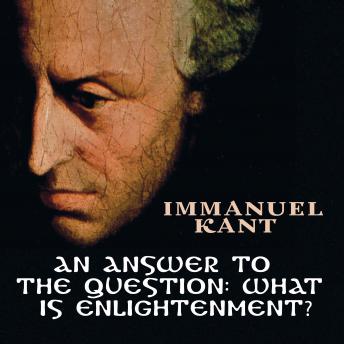 An Answer to the Question: What is Enlightenment?

Download or Stream instantly more than 55,000 audiobooks.
Listen to "An Answer to the Question: What is Enlightenment?" on your iOS and Android device.

'Answering the Question: What Is Enlightenment?' is a 1784 essay by the philosopher Immanuel Kant. In the December 1784 publication of the Berlinische Monatsschrift (Berlin Monthly), edited by Friedrich Gedike and Johann Erich Biester, Kant replied to the question posed a year earlier by the Reverend Johann Friedrich Zöllner, who was also an official in the Prussian government. Zöllner's question was addressed to a broad intellectual public community, in reply to Biester's essay entitled: 'Proposal, not to engage the clergy any longer when marriages are conducted' (April 1783) and a number of leading intellectuals replied with essays, of which Kant's is the most famous and has had the most impact. Kant's opening paragraph of the essay is a much-cited definition of a lack of enlightenment as people's inability to think for themselves due not to their lack of intellect, but lack of courage.
Kant's essay also addressed the causes of a lack of enlightenment and the preconditions necessary to make it possible for people to enlighten themselves. He held it necessary that all church and state paternalism be abolished and people be given the freedom to use their own intellect. Kant praised Frederick II of Prussia for creating these preconditions. Kant focused on religious issues, saying that 'our rulers' had less interest in telling citizens what to think in regard to artistic and scientific issues.