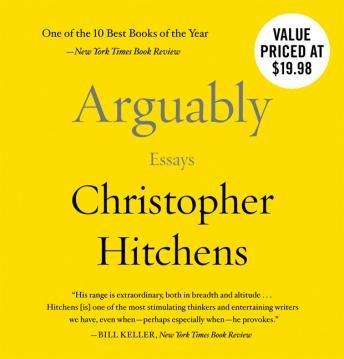 Download or Stream instantly more than 55,000 audiobooks.
Listen to "Arguably: Essays by Christopher Hitchens" on your iOS and Android device.

'All first-rate criticism first defines what we are confronting,' the late, great jazz critic Whitney Balliett once wrote. By that measure, the essays of Christopher Hitchens are in the first tier. For nearly four decades, Hitchens has been telling us, in pitch-perfect prose, what we confront when we grapple with first principles-the principles of reason and tolerance and skepticism that define and inform the foundations of our civilization-principles that, to endure, must be defended anew by every generation.

'A short list of the greatest living conversationalists in English,' said The Economist, 'would probably have to include Christopher Hitchens, Sir Patrick Leigh-Fermor, and Sir Tom Stoppard. Great brilliance, fantastic powers of recall, and quick wit are clearly valuable in sustaining conversation at these cosmic levels. Charm may be helpful, too.' Hitchens-who staunchly declines all offers of knighthood-hereby invites you to take a seat at a democratic conversation, to be engaged, and to be reasoned with. His knowledge is formidable, an encyclopedic treasure, and yet one has the feeling, reading him, of hearing a person thinking out loud, following the inexorable logic of his thought, wherever it might lead, unafraid to expose fraudulence, denounce injustice, and excoriate hypocrisy. Legions of readers, admirers and detractors alike, have learned to read Hitchens with something approaching awe at his felicity of language, the oxygen in every sentence, the enviable wit and his readiness, even eagerness, to fight a foe or mount the ramparts.

Here, he supplies fresh perceptions of such figures as varied as Charles Dickens, Karl Marx, Rebecca West, George Orwell, J.G. Ballard, and Philip Larkin are matched in brilliance by his pungent discussions and intrepid observations, gathered from a lifetime of traveling and reporting from such destinations as Iran, China, and Pakistan.

Hitchens's directness, elegance, lightly carried erudition, critical and psychological insight, humor, and sympathy-applied as they are here to a dazzling variety of subjects-all set a standard for the essayist that has rarely been matched in our time. What emerges from this indispensable volume is an intellectual self-portrait of a writer with an exemplary steadiness of purpose and a love affair with the delights and seductions of the English language, a man anchored in a profound and humane vision of the human longing for reason and justice.