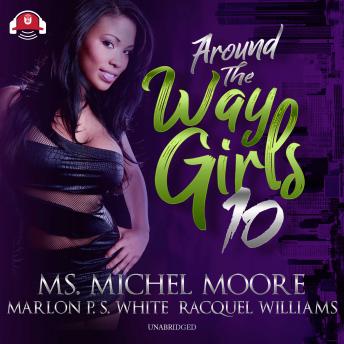 Around the Way Girls 10

Download or Stream instantly more than 55,000 audiobooks.
Listen to "Around the Way Girls 10" on your iOS and Android device.

Around the Way Girls 10, like its predecessors, is a fast-paced look at the lives of some street-smart women who think they know it all, but are about to get the lessons of their lives.

Sasha Eubanks lived the perfect life. Whatever she touched seemed to turn to gold, until she met and married Mario. He was a parents’ worst nightmare and everything you wouldn’t want a husband to be. Yet Sasha loved him, sacrificed for him, took care of him, and would do anything for him, including going to jail. While she is doing hard time for Mario’s crimes, he soon shows his wife that loyalty is just another word in the dictionary. Sasha has to get revenge if she wants to have any pride left, but can she overcome the mental hold Mario has on her?

Family ain’t no good; at least in Rissa Ford’s world. Forced to live with her aunt and predator-in-disguise uncle, Rissa feels as if her life was cursed from birth. Fed up with being tortured, she exposes the truth and is cast out into the mean streets of Detroit. Doing whatever she needs to make due, Rissa and her “newfound family” devise a plan for the ultimate revenge on those who have brought her the most harm.

Ajanay, Sheika, and London were born and raised in one of Richmond’s most ruthless housing projects. Faced with horrific home lives, all three girls turn to the streets and each other for comfort. Ajanay concocts a plan for them to get money out of Amir, one of the biggest dope boys from a rival housing project. However, Amir is a stone-cold killer with a long criminal history, and Ajanay has put them in harm’s way with no solid plan on how to escape. Will their love and loyalty for one another keep them together, or is it every woman for herself?