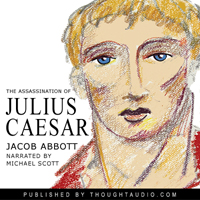 Download or Stream instantly more than 55,000 audiobooks.
Listen to "Assassination of Julius Caesar" on your iOS and Android device.

Julius Caesar was a Roman military and political leader. He played an important part in the transformation of the Roman Republic into the Roman Empire. His conquest of Gaul extended the Roman world all the way to the Atlantic Ocean, with the first Roman invasion of Britain in 55 BC. He is widely considered to be one of the greatest military geniuses of all time, as well as a brilliant politician and one of the ancient world's strongest leaders.

Caesar fought and won a civil war which left him undisputed master of the Roman world, and began extensive reforms of Roman society and government. He was proclaimed dictator for life, and heavily centralised the already faltering government of the weak Republic. Although, Caesar's friend Marcus Brutus conspired with others to assassinate Caesar in hopes of saving the Republic. The dramatic assassination on the Ides of March sparked a series of civil wars between the Caesarians that would eventually end with Caesar's great nephew and adopted son Octavian (later known as Caesar Augustus) as the first emperor and undisputed leader of the Roman world.