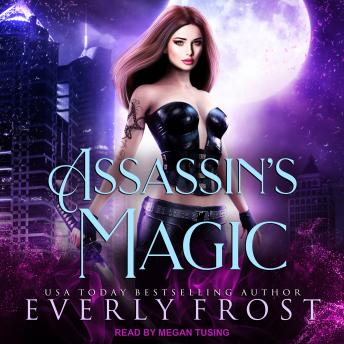 Download or Stream instantly more than 55,000 audiobooks.
Listen to "Assassin's Magic" on your iOS and Android device.

Is love worth the danger?

When Hunter Cassidy plans to infiltrate the Assassin's Legion, posing as an assassin-in-training, she is prepared to encounter danger every step of the way. What she doesn't expect is the ruggedly handsome and relentlessly fierce trainee, Slade Baines.

It's hard enough that Hunter is the first female to be accepted to train with the Master Assassin himself. Even when she beats the other candidates, the Master ranks her lowest of all. In the male-dominated Legion, the other trainees see her as a weak link to be driven out of their ranks.

When they try to force Hunter out, Slade gets in their way, becoming an unexpected ally. Despite her best intentions, Hunter finds herself lowering her guard around him, which only makes carrying out her secret mission more difficult and puts her in danger of falling for him.

But there's more at stake than Hunter's heart. The Master Assassin possesses the key to locate a weapon that Hunter must ensure remains hidden at all costs. In her quest to stop this deadly power from falling into the wrong hands, she must make a choice between following her heart . . . or fulfilling her destiny.