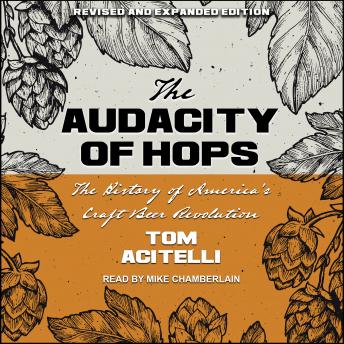 Audacity of Hops: The History of America's Craft Beer Revolution

Download or Stream instantly more than 55,000 audiobooks.
Listen to "Audacity of Hops: The History of America's Craft Beer Revolution" on your iOS and Android device.

Discover the underdog story of how America came to dominate beer stylistically in the second edition of Tom Acitelli's The Audacity of Hops: The History of America's Craft Beer Revolution, the most comprehensive history yet of American craft beer.

Based on extensive archival research as well as interviews with the movement's key players going back to the 1960s, this acclaimed book is the most comprehensive chronicle yet of one of the most interesting and lucrative culinary trends in the U.S. since World War II.

Acitelli weaves the story of the rise of American craft beer into the tales of trends like Slow Food and the rebirth of America's urban areas, and paints an unforgettable portrait of plucky entrepreneurial triumph. The backgrounds on all your favorite craft brewers are here, including often forgotten heroes from the movement's earliest days as well as the history of homebrewing since Prohibition.

This is the 'book for the craft beer nerd who thinks he or she already knows the story' (Los Angeles Times) as well as for fans of good food and drink in general.