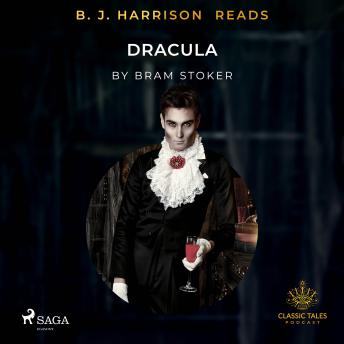 Download or Stream instantly more than 55,000 audiobooks.
Listen to "B. J. Harrison Reads Dracula" on your iOS and Android device.

You have certainly heard of Dracula. But do you know the whole story? Everything begins with Jonathan Harker, an English solicitor who travels to Transylvania. He is about to sell a piece of real estate to Count Dracula. The locals warn Harker of the strange things that occur near Count Dracula’s castle, but Harker doesn't listen. Shortly after he realizes that he has fallen into captivity. Will he get himself out of there? Will he live to tell everybody about the vampire Dracula? Does he have a chance against the bloodsucker or will Dracula make him regret his insurgency?
Find out the answers in Bram Stoker’s most famous story 'Dracula'.
B. J. Harrison started his Classic Tales Podcast back in 2007, wanting to breathe new life into classic stories. He masterfully plays with a wide array of voices and accents and has since then produced over 500 audiobooks. Now in collaboration with SAGA Egmont, his engaging narration of these famous classics is available to readers everywhere.
Bram Stoker was an Irish author who lived in the period 1847 – 1912. He is best known for his horror novel 'Dracula' but he is to be remembered for many more literary works such as 'The Judge’s House' and 'The Dracula’s guest'. Bram Stoker’s early years were marked by the fact that he was an invalid. This was however seen as an advantage of sorts by him because he meant that it gave him time to think of many things, which he later put to words in his works. Bram Stoker’s novels can be seen as a vivid combination between horror fiction and realism, perfect mixture of the real and the supernatural.