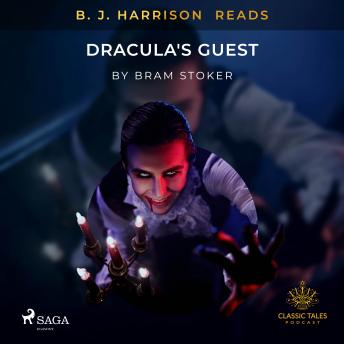 Download or Stream instantly more than 55,000 audiobooks.
Listen to "B. J. Harrison Reads Dracula's Guest" on your iOS and Android device.

An Englishman stops at an inn during his trip through Transylvania. He decides to wander around in a carriage despite the approaching night; darkness doesn't seem to worry him. He sets off but after a while the horses get scared by howling wolfs. The Englishman continues by foot and suddenly finds himself in a snowy and gloomy cemetery. This would not be that big of a problem if this specific night was not the so called Walpurgis Night, or in other words the time when spirits leave their graves to haunt the living. What is the Englishman’s fate? Find out in 'Dracula’s Guest' by Bram Stoker.
B. J. Harrison started his Classic Tales Podcast back in 2007, wanting to breathe new life into classic stories. He masterfully plays with a wide array of voices and accents and has since then produced over 500 audiobooks. Now in collaboration with SAGA Egmont, his engaging narration of these famous classics is available to readers everywhere.
Bram Stoker was an Irish author who lived in the period 1847 – 1912. He is best known for his horror novel 'Dracula' but he is to be remembered for many more literary works such as 'The Judge’s House' and 'The Dracula’s guest'. Bram Stoker’s early years were marked by the fact that he was an invalid. This was however seen as an advantage of sorts by him because he meant that it gave him time to think of many things, which he later put to words in his works. Bram Stoker’s novels can be seen as a vivid combination between horror fiction and realism, perfect mixture of the real and the supernatural.