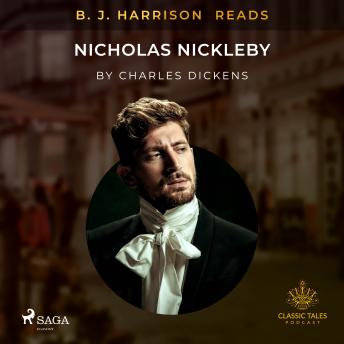 Download or Stream instantly more than 55,000 audiobooks.
Listen to "B. J. Harrison Reads Nicholas Nickleby" on your iOS and Android device.

Nicholas Nickleby is a young boy left without a father. Nicholas has to take care of his mother and sister and is forced by his uncle to work as an assistant to the schoolmaster Wackford Squeers. Squeers’ intentions are however not good and his only goal is to make Nicholas’ life miserable. At the same time Squeers’ wife convinces herself that Nicholas loves her and this gets the young boy in even greater trouble. Nicholas’ uncle is colluding with the schoolmaster and it seems like everybody is against him. Will Nicholas manage to save his sister and mother from his uncle’s clutches? Will he find a better future for himself? Will Squeers and the uncle get what they deserve?
B. J. Harrison started his Classic Tales Podcast back in 2007, wanting to breathe new life into classic stories. He masterfully plays with a wide array of voices and accents and has since then produced over 500 audiobooks. Now in collaboration with SAGA Egmont, his engaging narration of these famous classics is available to readers everywhere.
Charles Dickens was an English author who lived in the period 1812 – 1870. He is regarded as one of the best and most influential authors of the Victorian era as he provided a portrait of the underclass and the poor conditions that people lived in in this period. This led to social awareness and furthered change. Charles Dickens’ style was a vivid combination of fantasy and realism, personal life experience and fiction, and because of the way he conveyed his ideas, his literature appealed to both the rich and the poor. Some of his best known works are 'David Copperfield', 'A Christmas Carol', 'Oliver Twist' and many more. His popularity remains strong today and it may be due to the fact that 'amid all the variety of 'readings', those of Mr. Charles Dickens stand alone' as 'The Times' wrote in 1868.