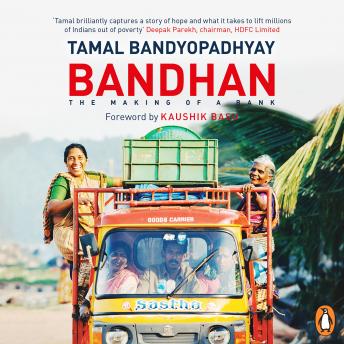 Download or Stream instantly more than 55,000 audiobooks.
Listen to "Bandhan" on your iOS and Android device.

This is the story of Bandhan, the only bank that emerged in eastern India after Independence. Founded by the son of a sweet vendor, with a mere Rs 2 lakh, the sum total of his life savings.

On 17 June, 2015, Chandra Shekhar Ghosh stepped out of the Reserve Bank of India building in Mumbai with the much-coveted banking licence, beating some of the country's top corporate houses. This moment compensated for all the frustrations that had come along the way. A year later, Bandhan Bank was launched with 6.7 million small borrowers.

So, how did Ghosh build India's biggest MFI from scratch and then, along with his team, transform it into a universal bank? Bandhan: The Making of a Bank chronicles that journey.
This is also Ghosh's personal story-of a boy growing up in small-town Agartala struggling with poverty, but relentless in his ambition to make it big. He battles competition, hostile moneylenders, a tough economic climate and the perpetual lack of resources. Nobody in India perhaps knows better than him the psyche of a small borrower and the alchemy of doing business with the poor, profitably.


This is one of India's biggest entrepreneurial stories.