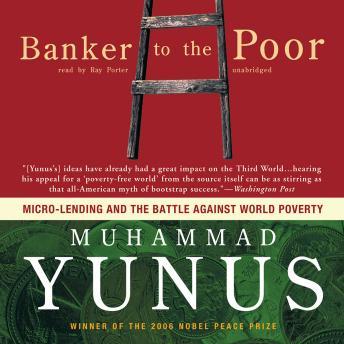 Banker to the Poor: Micro-Lending and the Battle against World Poverty

Download or Stream instantly more than 55,000 audiobooks.
Listen to "Banker to the Poor: Micro-Lending and the Battle against World Poverty" on your iOS and Android device.

In 1983, Muhammad Yunus established Grameen, a bank devoted to providing the poorest citizens of Bangladesh with miniscule loans. Believing that credit is a basic human right, not the privilege of a few, Yunus aimed to support that spark of personal initiative and enterprise by which the poor might lift themselves out of poverty forever. Grameen Bank now provides over 2.5 billion dollars of micro-loans to more than two million families in rural Bangladesh, with repayment rates at nearly 100 percent.
In Banker to the Poor, Yunus traces the journey that led him to rethink the economic relationship between rich and poor and recounts the challenges he faced in founding Grameen. He provides wise, hopeful guidance for anyone who would like to join him in the burgeoning world movement of micro-lending to eradicate world poverty.