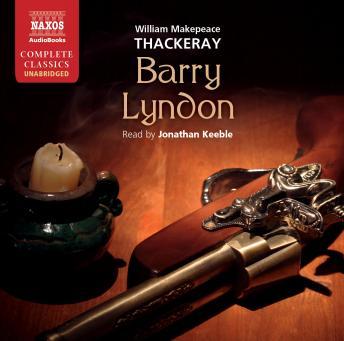 Download or Stream instantly more than 55,000 audiobooks.
Listen to "Barry Lyndon" on your iOS and Android device.

Like Tom Jones before him, Barry Lyndon is one of the most lively and roguish characters in English literature. He may now be best known through the colourful Stanley Kubrick film released in 1975, but it is Thackeray who, in true 19th-century style, shows the darker side of this 18th-century hero; hence it remains a startling novel. Following the death of an English officer, Barry flees his native Ireland and attempts to establish himself as one of England's aristocratic elite. Through backstabbing and scheming he reaches the level of society to which he always aspired. However, intent on criticizing the period's social order, Thackeray ensures that this success is soon followed by the hero's ultimate decline. Jonathan Keeble's energetic reading imbues the period with colour and illuminates the sheer inventiveness of Thackeray's literary and topical satire.