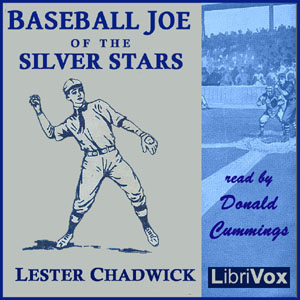 Baseball Joe of the Silver Stars

Download or Stream instantly more than 55,000 audiobooks.
Listen to "Baseball Joe of the Silver Stars" on your iOS and Android device.

"Baseball Joe" Matson has recently moved to Riverside with his family, in this opening volume of Baseball Joe series. Joe is a wide-awake country boy who enjoys playing baseball. We follow his career in the series, and his adventures, as he joins Riverside's local nine and makes good, playing the position he most enjoys - that of pitcher, are recounted here. When not on the diamond, Joe is assisting his father against foes who are trying to steal Mr. Matson's machinery patents.

Lester Chadwick is one of dozens of house pseudonyms created by the Stratemeyer Syndicate in the early to mid 1900's, to "author" children's series. Contract writers (whose identities were to remain unknown under tight secrecy) were hired to write the books in the series under the various names, usually multiple writers contributing volumes to a particular series. Howard R. Garis (1873-1962) is thought to have solely ghost-written the 14-volume Baseball Joe series. (Summary by Donald Cummings)