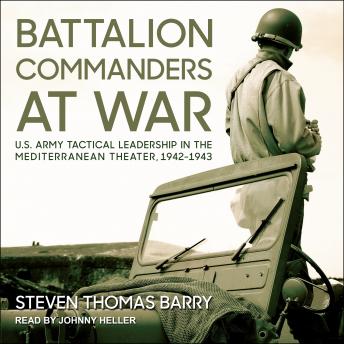 Download or Stream instantly more than 55,000 audiobooks.
Listen to "Battalion Commanders at War: U.S. Army Tactical Leadership in the Mediterranean Theater, 1942-1943" on your iOS and Android device.

Most histories of the US Army in World War II view the Mediterranean Theater of Operations primarily as a deadly training ground for very green forces, where lessons learned on the beaches of Oran, in the hills of the Kasserine Pass area, and at the collapse of the Tunis bridgehead all contributed to later success in Western Europe. Steven Barry, however, contends that victory in the MTO would not have materialized without the leadership of battalion-level commanders. They operated at a high level, despite the lack of combat experience for themselves and their troops, ineffective leadership at higher levels, and deficiencies in equipment, organization, and mobilization.

Barry portrays these officers as highly trained, adaptable, and courageous in their first combat experiences in North Africa and Sicily. Their leadership, he argues, brought discipline, maturity, experience, and the ability to translate common operational guidance into tactical reality, and thus contributed significantly to battlefield success in North Africa and Sicily in 1942-1943. To explain how this happened, he examines their prewar experiences, including professional military education and unit training exercises; personal factors such as calmness and physical resilience under fire; and the ability to draw upon doctrine, creatively apply the resources at their disposal, and clearly define and communicate mission goals and means. He also reveals how battalion leaders incorporated technological innovations into combined arms maneuvers by employing tank capabilities and close air support doctrine.

As Barry's assessment shows, these battalion commanders were not the sole reason for the Allied triumph in North Africa and Sicily, but victory would not have been possible without the special brand of military leadership they exhibited throughout those campaigns. Under their leadership, even inexperienced units were able to deliver credible combat performance, and without the regular army battalion leaders, US units could not have functioned tactically early in the war.

One of the few studies to focus on tactical adaptation at the battalion level in conventional warfare, Barry's book attests to the pivotal value of professional military education-and makes an important contribution to today's 'organizational learning' debate-while providing an in-depth view of adaptation of US infantry and armored forces in 1942-1943.