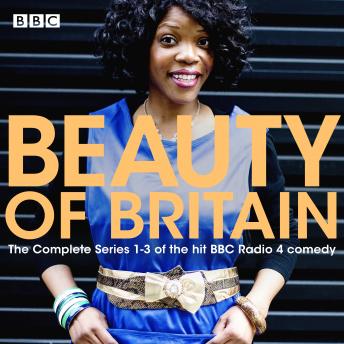 Beauty of Britain: The Complete Series 1-3

Download or Stream instantly more than 55,000 audiobooks.
Listen to "Beauty of Britain: The Complete Series 1-3" on your iOS and Android device.

Beauty of Britain breaks the embarrassed silence about what happens to us when we get old and start to lose our faculties. It shows the process in all its chaotic tragi-comedy but it does so from the point of view of a migrant worker, Beauty, whose Zimbabwean Shona background has taught her to respect age. Beauty sees Britain at its best, its worst and also sometimes without its clothes on running the wrong way down the M6 with a toy dog shouting 'Come on!'

In first series Beauty discovers the glories of Weston-super-Mare's charity shops, has a disastrous crush on worship leader Wayne and looks after the elderly Mr Easterby, who has a new girlfriend and is behaving like a love-struck teenager.

In the second series, Beauty’s employer, the Featherdown Agency, sends her to provide care for those who need it - and some who don't, but all of whom have relatives with guilty consciences.

In the third and final series Beauty's mother pays her a visit, finds herself on the receiving end of a surprising proposal and wonders is Stephen, a charming English gent, is just like Hugh Grant in those movies.