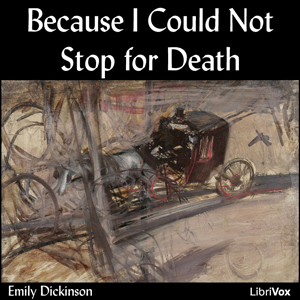 Because I Could Not Stop For Death

Download or Stream instantly more than 55,000 audiobooks.
Listen to "Because I Could Not Stop For Death" on your iOS and Android device.

LibriVox volunteers bring you 15 recordings of Because I Could Not Stop For Death by Emily Dickinson. This was the Weekly Poetry project for May 12, 2013.

Despite Dickinson's prolific writing, fewer than a dozen of her poems were published during her lifetime. After her younger sister Lavinia discovered the collection of nearly eighteen hundred poems, Dickinson's first volume was published four years after her death. Until the 1955 publication of Dickinson's Complete Poems by Thomas H. Johnson, her poems were considerably edited and altered from their manuscript versions. Since 1890 Dickinson has remained continuously in print. (Summary by Wikipedia)