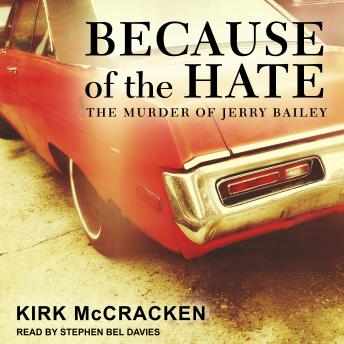 Because of the Hate: The Murder of Jerry Bailey

Download or Stream instantly more than 55,000 audiobooks.
Listen to "Because of the Hate: The Murder of Jerry Bailey" on your iOS and Android device.

Because of the Hate is the true story about the murder of Jerry Bailey, a beloved high school football coach in Oklahoma.

In 1976, Jerry Bailey had resigned as the Sapulpa High School head football coach but was murdered by his assistant Paul Reagor Jr. The book goes into detail about the day the coaches went missing, the murder, the trial and the fall out from it. Five years removed from winning a state championship in Nowata, Jerry Bailey had ended his run as the head coach at Sapulpa and was ready to move on to another high school and another football team. However, Bailey and his assistant, Reagor, left school on a January morning and never returned. An exhaustive search eventually found both coaches the next day but only one was still alive. Reagor was found inside of an abandoned farmhouse several towns away from Sapulpa and Bailey was dead inside of the truck of Reagor's car.

Why did Reagor kill Bailey? Why did they leave the school that day? The town of Sapulpa has never really discussed the murder out of respect for Bailey's wife and children. It left nothing but rumor, speculation and questions, but now, over forty years later, every question can be answered.