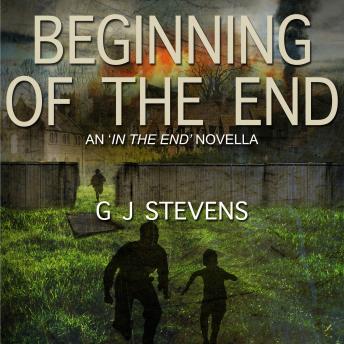 Beginning of the End: An 'In the End' Novella

Download or Stream instantly more than 55,000 audiobooks.
Listen to "Beginning of the End: An 'In the End' Novella" on your iOS and Android device.

Sixteen-year-old Jordan dreams of excitement, hoping something would happen to make his tiny Cornish village more interesting. During his school holidays, left by himself with nothing but pixelated zombies on the Xbox for company, he wishes for a life where the adventures are real.

Then one morning, he gets more than he planned for when, unexpectedly, a mysterious affliction descends, sending his brother and the rest of the village into a murderous rage. Despite his panic, Jordan finds temporary sanctuary, shutting himself in a cupboard to await rescue. Soon the sirens come, but quickly fall silent and no one arrives, leaving him no option but to fight against his fear or face dying by the hands of the infected villagers.

Once out of hiding, the joy at seeing soldiers with guns soon falls away when he realizes they’re not there to save him but to eliminate the risk of the disease spreading. With a huge new wall erected around the village where he’d grown up, can Jordan conquer his fear that the soldiers are hunting down everyone, not just those that are infected? Can he summon the courage to fend off those who had been his family and friends, those who have lost all sense of being human? Can he get out to the safety of the big wide world before the same fate falls his way?

BEGINNING OF THE END is a prequel novella for the fast-paced zombie thriller series, IN THE END. The rest of the books in the series are available exclusively from Audible, Amazon and Apple.