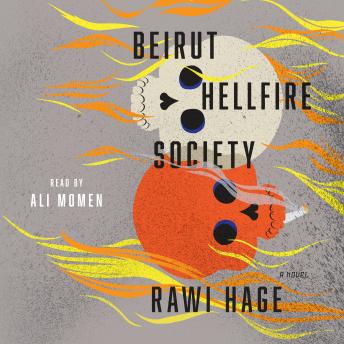 Download or Stream instantly more than 55,000 audiobooks.
Listen to "Beirut Hellfire Society" on your iOS and Android device.

An explosive new novel from the award-winning, bestselling author of De Niro's Game and Cockroach.

It is 1978 in Beirut, Lebanon, partway through that country's Civil War. On a torn-up street overlooking a cemetery in the city's Christian enclave, we meet an eccentric young man named Pavlov, the son of a local undertaker. When his father meets a sudden and untimely death, Pavlov is approached by a colourful member of the mysterious Hellfire Society--a secret group to which his father had belonged. The Society's purpose is to arrange burial or cremation for those who for various reasons have been outcast and abandoned by family, clergy and state. Pavlov agrees to take up his father's work for the society, and over the course of the novel he becomes a survivor-chronicler of his embattled and fading community, bearing witness to its enduring rituals as well as its inevitable decline.
Deftly combining comedy with tragedy, Beirut Hellfire Society is at once propulsive, elegiac, outrageous, profane and transcendent--a profoundly moving meditation on what it means to live through war. It asks what, if anything, can be accomplished or preserved in the face of certain change and imminent death. Here is an exhilarating, subversive, beautiful and timely new work that reinforces Rawi Hage's status as one of our most original, necessary, fearless and important writers.