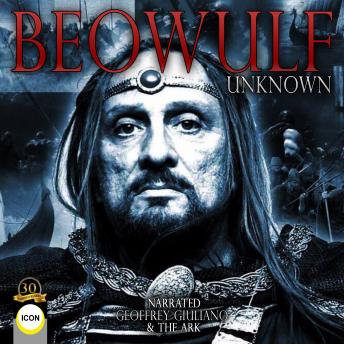 Download or Stream instantly more than 55,000 audiobooks.
Listen to "Beowulf" on your iOS and Android device.

Beowulf is an Old English epic poem in the tradition of Germanic heroic legend consisting of 3,182 alliterative lines. It is one of the most important and most often translated works of Old English literature. The date of composition is a matter of contention among scholars; the only certain dating is for the manuscript, which was produced between 975 and 1025. Scholars call the anonymous author the 'Beowulf poet'. The story is set in pagan Scandinavia in the 6th century. Beowulf, a hero of the Geats, comes to the aid of Hrothgar, the king of the Danes, whose mead hall in Heorot has been under attack by the monster Grendel. After Beowulf slays him, Grendel's mother attacks the hall and is then defeated. Victorious, Beowulf goes home to Geatland and becomes king of the Geats. Fifty years later, Beowulf defeats a dragon but is mortally wounded in the battle. After his death, his attendants cremate his body and erect a tower on a headland in his memory. Scholars have debated whether Beowulf was transmitted orally, affecting its interpretation: if it was composed early, in pagan times, then the paganism is central and the Christian elements were added later, whereas if it was composed later, in writing, by a Christian. Beowulf is written mostly in the West Saxon dialect of Old English, but many other dialectal forms are present, suggesting that the poem may have had a long and complex transmission throughout the dialect areas of England.No definite sources or analogs of the poem can be proven, but many suggestions have been made, including the Icelandic Grettis saga, the Norse story of Hrolf Kraki and his bear-shapeshifting servant Bodvar Bjarki, the international folktale the Bear's Son Tale, and the Irish folktale of the Hand and the Child. Persistent attempts have been made to link Beowulf to tales from Homer's Odyssey or Virgil's Aeneid. More definite are Biblical parallels, with clear allusions to the books of Genesis, Exodus, and Daniel.