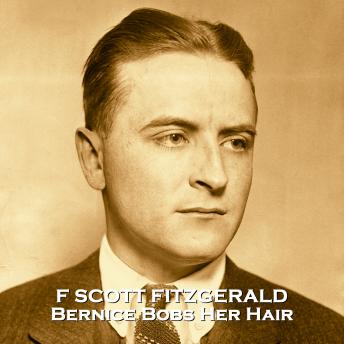 Download or Stream instantly more than 55,000 audiobooks.
Listen to "Bernice Bobs Her Hair" on your iOS and Android device.

Francis Scott Key Fitzgerald was born on 24th September 1896 in Saint Paul, Minnesota into an upper-middle class family. Whilst his mother was pregnant with him, his two young sisters tragically died. Fitzgerald once said this was when his destiny as a writer was ordained.His intelligence and talent was recognised from an early age, with his first story, about a detective being published in the school magazine when he was just 13. In 1913 he enrolled at Princeton but his devotion to his own literary pursuits resulted in him leaving and, rather bizarrely, joining the Army. In 1918, stationed at Fort Sheridan near Montgomery, Alabama he met and became infatuated and then inseparable from Zelda Sayre. Initially though she refused to marry him but with the success of 'This Side of Paradise', the fame and the flow of money enabled them both to begin a gilded life. For them this was The Jazz Age. For Fitzgerald he was already an alcoholic.He continued to write with great mastery and the titles of his novels and many of his 164 short stories are household names. The Great Gatsby, often cited as The Great American Novel was published to mixed reviews. As America moved from the Great Depression to the slaughter of the Second World War his works and himself were seen as far too entwined with the decadent twenties. The world had moved on and he hadn't. Further tragedy was never far from his life. Zelda after years of erratic and now intolerable behaviour was committed to an institution in 1936. His own sales began to decline and he became a hack for hire in Hollywood, dependent on increasing amounts of booze and the weekly pay check. His drunken state had often resulted in arrest or hospitalisation, further imperiling his talents. Despite his contribution to many MGM films he received only one credit.The end came all too soon for one of America's greatest ever writers. On 21st December 1940, at only 44 years of age in Hollywood, F Scott Fitzgerald succumbed to a heart attack.His classic 'Bernice Bobs Her Hair' carefully pulls apart the relationship between two cousins one hot summer. Something has to give and with Fitzgerald its an absolute certainty that the brittle lives of young women finally snap in unique ways.