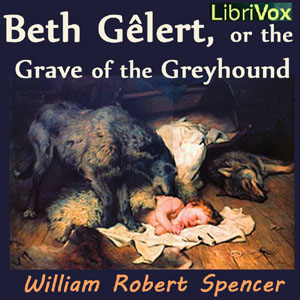 Beth Gêlert, or the Grave of the Greyhound

Download or Stream instantly more than 55,000 audiobooks.
Listen to "Beth Gêlert, or the Grave of the Greyhound" on your iOS and Android device.

LibriVox volunteers bring you 16 recordings of Beth Gêlert, or the Grave of the Greyhound by William Robert Spencer. This was the Fortnightly Poetry project for July 8, 2012.

William Robert Spencer, English poet and wit, was the younger son of Lord Charles Spencer and his wife Mary Beauclerk. Spencer's wit made him a popular member of society. He belonged to the Whig set of Charles James Fox and Richard Brinsley Sheridan and was frequently a guest of the prince of Wales. He did not desire a public life, being content as a writer of "occasional" verse and vers de société.
His writings were greatly appreciated by his contemporaries, being warmly praised by such figures as Sir Walter Scott, John Wilson, and Lord Byron. ( Summary from Wikipedia )