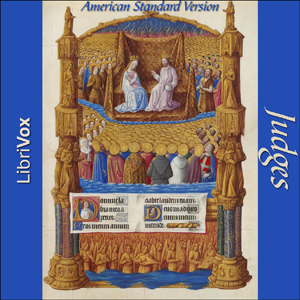 Download or Stream instantly more than 55,000 audiobooks.
Listen to "Bible (ASV) 07: Judges" on your iOS and Android device.

"The Book of Judges (Hebrew: Sefer Shoftim) is a book of the Bible originally written in Hebrew. It appears in the Tanakh and in the Christian Old Testament. Its title refers to its contents; it contains the history of Biblical judges (not to be confused with modern judges), who helped rule and guide the ancient Israelites, and of their times. As Judges stands today, the last judge it mentions is Samson, and although there are two further stories, the traditional view is that Samson's exploits probably synchronise with the period immediately preceding Eli, who was both high priest and judge. Both academic views and traditional thought hence view the narrative of the judges as ending at Samson, picking up again at 1 Samuel 1:1 to consider Eli, and continuing through to 1 Samuel 7:2. As for the stories at the end of the Book, which are set in the same time period as the judges but discuss people other than the judges, there is much affinity between these and the Book of Ruth, and many people believe Ruth originally belonged amongst them. There were thirteen Biblical Judges." (Summary by Wikipedia)