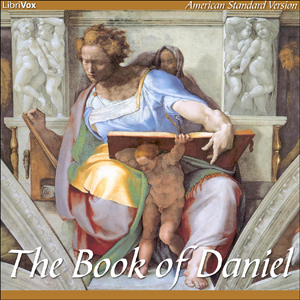 Download or Stream instantly more than 55,000 audiobooks.
Listen to "Bible (ASV) 27: Daniel" on your iOS and Android device.

The Book of Daniel (?????), originally written in Hebrew and Aramaic, is a book in both the Hebrew Bible (Tanakh) and the Christian Old Testament. The book is set during the Babylonian Captivity, a period when Jews were deported and exiled to Babylon following the Siege of Jerusalem of 597 BC. The book revolves around the figure of Daniel, an Israelite who becomes an adviser to Nebuchadnezzar, the ruler of Babylon from 605 BC - 562 BC. The book has two distinct parts: a series of six narratives (chapters one to six) and four apocalyptic visions (chapters seven to twelve). The narratives take the form of court stories which focus on tests of religious fidelity involving Daniel and his friends (chapters one, three and six), and Daniel's interpretation of royal dreams and visions (chapters two, four and five). In the second part of the book, Daniel recounts his reception of dreams, visions and angelic interpretations in the first person.
(Summary by Wikipedia)