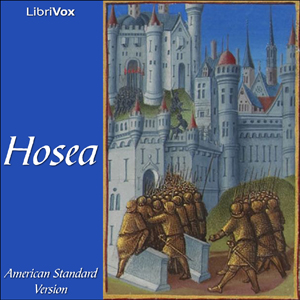 Download or Stream instantly more than 55,000 audiobooks.
Listen to "Bible (ASV) 28: Hosea" on your iOS and Android device.

Hosea was the son of Beeri and a prophet in Israel in the 8th century BCE. He is one of the Twelve Prophets of the Jewish Hebrew Bible, also known as the Minor Prophets of the Christian Old Testament. We know practically nothing about the life or social status of Hosea. According to the Book of Hosea, he married the prostitute Gomer, the daughter of Diblatayim, at God's command. He lived in the Northern Kingdom in the period 740-725 BCE. In Hosea 5:8 ff., there is a reference to the wars which led to the capture of the kingdom by the Assyrians (ca. 734-732 BCE). It is not certain if he has also experienced the destruction of Samaria, which is foreseen in Hosea 14:1. Hosea's family life reflected the "adulterous" relationship which Israel had built with polytheistic gods. His children's names made them like walking prophecies of the fall of the ruling dynasty and the severed covenant with God - much like the prophet Isaiah a generation later. Hosea is often seen as a "prophet of doom", but underneath his message of destruction is a promise of restoration." (From Wikipedia)