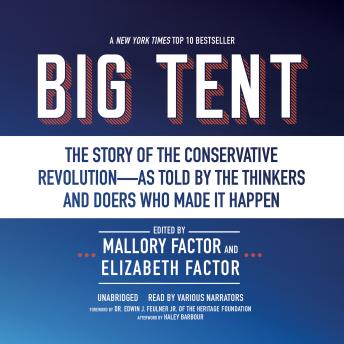 Big Tent: The Story of the Conservative Revolution—As Told by the Thinkers and Doers Who Made It Happen

Download or Stream instantly more than 55,000 audiobooks.
Listen to "Big Tent: The Story of the Conservative Revolution—As Told by the Thinkers and Doers Who Made It Happen" on your iOS and Android device.

Bestselling author, professor, and pundit Mallory Factorilluminates the conservative tradition in American politics with essays fromleading figures in the conservative movement.
Ambitious in its breadth and depth, Big Tent providesa fresh and surprising treatment of the conservative movement as told by theleaders themselves. In this unique collection, which is based on Factor'sstar-studded course at The Citadel, conservative leaders explain how themovement developed as a powerful force in American politics, how it functionsnow with a wide range of viewpoints, and where it is going in the future. Theorigin of conservative ideas-from their ancient roots to their English origins,from the American Revolution to William F. Buckley, Alexis de Tocqueville toBarry Goldwater, and libertarianism to neo-conservatism-are revealed andexamined in this compelling volume.
These illuminating essays include
Newt Gingrich on the political ideas surrounding the American Revolution; Yaron Brook of the Ayn Rand Institute on the emergence of libertarianism; Ed Meese on the Reagan Revolution; David Keene of the NRA on Buckley-style "fusionism"; Phyllis Schlafly on the rise of the religious right; Donald Rumsfeld on the Bush administration's "war on terror"; Rand Paul on the future of the conservative movement.Insightful and stimulating, Big Tent is anoutstanding survey of the conservative movement from its most significantliving figures.