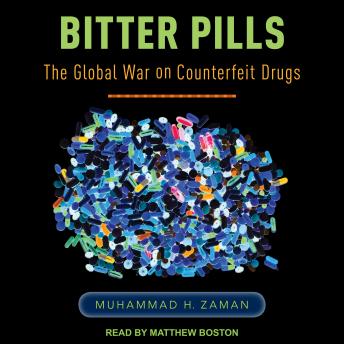 Download or Stream instantly more than 55,000 audiobooks.
Listen to "Bitter Pills: The Global War on Counterfeit Drugs" on your iOS and Android device.

The explosion of Internet commerce, coupled with globalization and increased pharmaceutical use, has led to an unprecedented vulnerability in the U.S. drug supply. Today, an estimated 80% of our drugs are manufactured overseas, mostly in India and China. Every link along this supply chain offers an opportunity for counterfeiters, and increasingly, they are breaking in. In 2008, fake doses of the blood thinner Heparin killed 81 people worldwide. In 2012, a counterfeit version of the cancer drug Avastin, containing no active chemotherapy ingredient, was widely distributed in the United States. In early 2013, a drug trafficker was sentenced to prison for distributing an assortment of counterfeit, Chinese-made pharmaceuticals across America. By the time he was arrested, he had already sold over 140,000 fake pills to customers.