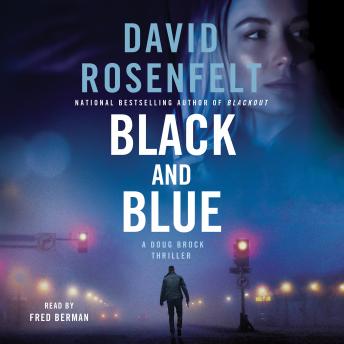 Download or Stream instantly more than 55,000 audiobooks.
Listen to "Black and Blue: A Doug Brock Thriller" on your iOS and Android device.

'The latest mystery from author David Rosenfelt is a wonderful weave of twists and unpredictability, ably narrated by Fred Berman, whose joy at narration is evident from the beginning.' - AudioFile Magazine

Doug Brock hasn't had it easy since his getting shot in the line of duty as a New Jersey state police officer. Between the amnesia and having to solve two murder cases, it hasn't been the most restful recovery.

Now, the cold case department is checking evidence from a murder case Doug was investigating before the accident, but the DNA points to a man Doug eliminated as a suspect... and he remembers none of it. Doug begins to reinvestigate what turns out to be a series of unsolved killings and must retrace his steps to discover why he would have let the suspect go free. What he uncovers may be more dangerous than any case he's faced yet.