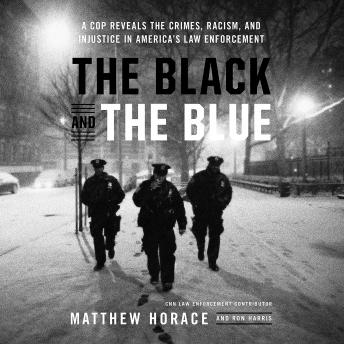 The Black and the Blue: A Cop Reveals the Crimes, Racism, and Injustice in America¿s Law Enforcement

Download or Stream instantly more than 55,000 audiobooks.
Listen to "The Black and the Blue: A Cop Reveals the Crimes, Racism, and Injustice in America¿s Law Enforcement" on your iOS and Android device.

During his 28-year career, Matthew Horace rose through the ranks from a police officer working the beat to a federal agent working criminal cases in some of the toughest communities in America to a highly decorated federal law enforcement executive managing high-profile investigations nationwide. Yet it was not until seven years into his service- when Horace found himself face down on the ground with a gun pointed at his head by a white fellow officer-that he fully understood the racism seething within America's police departments.

Through gut-wrenching reportage, on-the-ground research, and personal accounts from interviews with police and government officials around the country, Horace presents an insider's examination of archaic police tactics. He dissects some of the nation's most highly publicized police shootings and communities to explain how these systems and tactics have hurt the people they serve, revealing the mistakes that have stoked racist policing, sky-high incarceration rates, and an epidemic of violence.

'Horace's authority as an experienced officer, as well as his obvious integrity and courage, provides the book with a gravitas.' -- The Washington Post

'The Black and the Blue is an affirmation of the critical need for criminal justice reform, all the more urgent because itcomes from an insider who respects his profession yet is willing to reveal its flaws.' -- USA Today