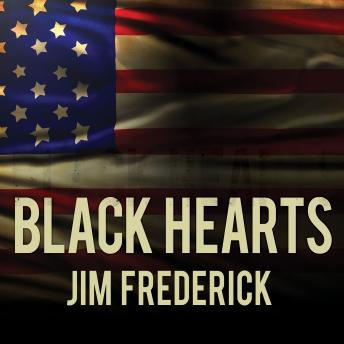 Black Hearts: One Platoon's Descent into Madness in Iraq's Triangle of Death

Download or Stream instantly more than 55,000 audiobooks.
Listen to "Black Hearts: One Platoon's Descent into Madness in Iraq's Triangle of Death" on your iOS and Android device.

This is the story of a small group of soldiers from the 101st Airborne Division's fabled 502nd Infantry Regiment-a unit known as the Black Heart Brigade. Deployed in late 2005 to Iraq's so-called Triangle of Death, a veritable meat grinder just south of Baghdad, the Black Hearts found themselves in arguably the country's most dangerous location at its most dangerous time.

Hit by near-daily mortars, gunfire, and roadside bomb attacks, suffering from a particularly heavy death toll, and enduring a chronic breakdown in leadership, members of one Black Heart platoon-1st Platoon, Bravo Company, 1st Battalion-descended, over their year-long tour of duty, into a tailspin of poor discipline, substance abuse, and brutality.

Four 1st Platoon soldiers would perpetrate one of the most heinous war crimes U.S. forces have committed during the Iraq War-the rape of a fourteen-year-old Iraqi girl and the cold-blooded execution of her and her family. Three other 1st Platoon soldiers would be overrun at a remote outpost-one killed immediately and two taken from the scene, their mutilated corpses found days later booby-trapped with explosives.

Black Hearts is an unflinching account of the epic, tragic deployment of 1st Platoon. Drawing on hundreds of hours of in-depth interviews with Black Heart soldiers and first-hand reporting from the Triangle of Death, Black Hearts is a timeless story about men in combat and the fragility of character in the savage crucible of warfare. But it is also a timely warning of new dangers emerging in the way American soldiers are led on the battlefields of the twenty-first century.