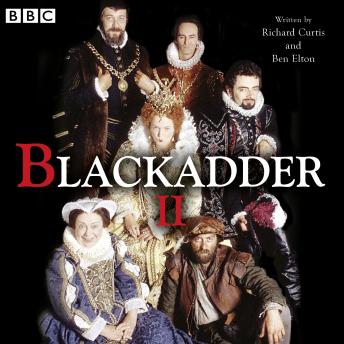 Download or Stream instantly more than 55,000 audiobooks.
Listen to "Blackadder II" on your iOS and Android device.

England 1558-1603. The filthy genes of the Blackadder dynasty bubble to the surface of history's melting pot as Lord Edmund, arrogant peer-about-town, swaggers with a big head and small beard in search of grace and favour from the stark raving mad Queen Bess. Listen as Lord Blackadder falls in love with a girl named Bob, takes over the job of executioner whilst almost losing his own head, schemes to raise £1,000 to pay off a perverted Bishop, goes on a far-off sea voyage to the remote country of France, and plays charades with a member of the Spanish Inquisition. Rowan Atkinson stars as Blackadder in Richard Curtis' and Ben Elton's award-winning comedy in which, ably hampered by Tony Robinson as the loyal Baldrick, he wreaks havoc throughout the centuries. This collection includes the following episodes: 'Bells', 'Head', 'Potato', 'Money', 'Beer' and 'Chains'.