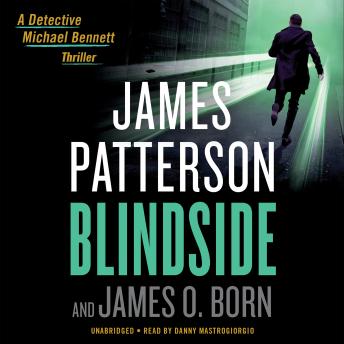 Download or Stream instantly more than 55,000 audiobooks.
Listen to "Blindside" on your iOS and Android device.

The mayor of New York has a daughter who's missing and in danger. Detective Michael Bennett has a son who's in prison. The two strike a deal.
Bennett and the mayor have always had a tense relationship, but now the mayor sees in Bennett a discreet investigator with family worries of his own. Just one father helping another.
The detective leaps into the case and sources lead him to a homicide in the Bronx. The victim has ties to a sophisticated hacking operation -- and also to the mayor's missing daughter, Natalie, a twenty-one-year-old computer prodigy. The murder is part of a serial killing spree, one with national security implications. And suddenly Bennett is at the center of a dangerous triangle anchored by NYPD, FBI, and a transnational criminal organization.
Michael Bennett has always been an honorable man, but sometimes -- when the lives of innocents are at stake -- honor has to take a back seat. Survival comes first.