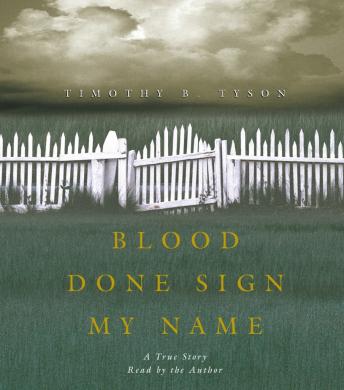 Download or Stream instantly more than 55,000 audiobooks.
Listen to "Blood Done Sign My Name: A True Story" on your iOS and Android device.

The “riveting”* true story of the fiery summer of 1970, which would forever transform the town of Oxford, North Carolina—a classic portrait of the fight for civil rights in the tradition of To Kill a Mockingbird

On May 11, 1970, Henry Marrow, a twenty-three-year-old black veteran, walked into a crossroads store owned by Robert Teel and came out running. Teel and two of his sons chased and beat Marrow, then killed him in public as he pleaded for his life.

Like many small Southern towns, Oxford had barely been touched by the civil rights movement. But in the wake of the killing, young African Americans took to the streets. While lawyers battled in the courthouse, the Klan raged in the shadows and black Vietnam veterans torched the town’s tobacco warehouses. Tyson’s father, the pastor of Oxford’s all-white Methodist church, urged the town to come to terms with its bloody racial history. In the end, however, the Tyson family was forced to move away.

“If you want to read only one book to understand the uniquely American struggle for racial equality and the swirls of emotion around it, this is it.”—Milwaukee Journal Sentinel

“Blood Done Sign My Name is a most important book and one of the most powerful meditations on race in America that I have ever read.”—Cleveland Plain Dealer