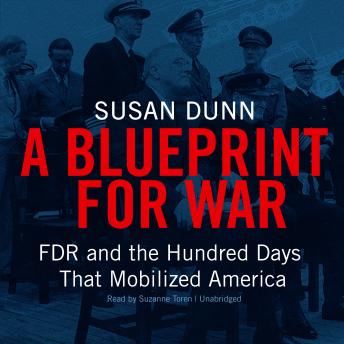 A Blueprint for War: FDR and the Hundred Days That Mobilized America

Download or Stream instantly more than 55,000 audiobooks.
Listen to "A Blueprint for War: FDR and the Hundred Days That Mobilized America" on your iOS and Android device.

In the cold winter months that followed Franklin Roosevelt's election in November 1940 to an unprecedented third term in the White House, he confronted a worldwide military and moral catastrophe. Almost all the European democracies had fallen under the ruthless onslaught of the Nazi army and air force. Great Britain stood alone, a fragile bastion between Germany and American immersion in war. In the Pacific world, Japan had extended its tentacles deeper into China. Susan Dunn dramatically brings to life the most vital and transformational period of Roosevelt's presidency: the hundred days between December 1940 and March 1941, when he mobilized American industry, mustered the American people, initiated the crucial programs and approved the strategic plans for America's leadership in World War II. As the nation began its transition into the preeminent military, industrial, and moral power on the planet, FDR laid out the stunning blueprint not only for war but for the American Century.