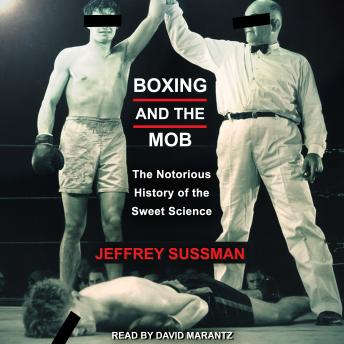 Boxing and the Mob: The Notorious History of the Sweet Science

Download or Stream instantly more than 55,000 audiobooks.
Listen to "Boxing and the Mob: The Notorious History of the Sweet Science" on your iOS and Android device.

More than any other sport, boxing has a history of being easy to rig. There are only two athletes and one or both may be induced to accept a bribe; if not the fighters, then the judges or referee might be swayed. In such inviting circumstances, the mob moved into boxing in the 1930s and profited by corrupting a sport ripe for exploitation.

In Boxing and the Mob: The Notorious History of the Sweet Science, Jeffrey Sussman tells the story of the coercive and criminal underside of boxing, covering nearly the entire twentieth century. He profiles some of its most infamous characters, such as Owney Madden, Frankie Carbo, and Frank Palermo, and details many of the fixed matches in boxing's storied history. In addition, Sussman examines the influence of the mob on legendary boxers-including Primo Carnera, Sugar Ray Robinson, Max Baer, Carmen Basilio, Sonny Liston, and Jake LaMotta-and whether they caved to the mobsters' threats or refused to throw their fights.

Boxing and the Mob is the first book to cover a century of fixed fights, paid-off referees, greedy managers, misused boxers, and the mobsters who controlled it all. True crime and the world of boxing are intertwined with absorbing detail in this notorious piece of American history.