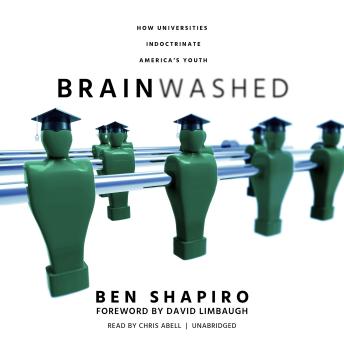 Download or Stream instantly more than 55,000 audiobooks.
Listen to "Brainwashed: Universities Indoctrinate America's Youth" on your iOS and Android device.

When parents send their children off to college, mom and dad hope they'll return more cultivated, knowledgeable, and astute-able to see issues from all points of view. But, according to Ben Shapiro, there's only one view allowed on most college campuses: a rabid brand of liberalism that must be swallowed hook, line, and sinker.In this explosive exposé, Ben Shapiro, a UCLA graduate, reveals how America's university system is one of the largest brainwashing machines on the planet. Examining this nationwide problem from firsthand experience, Shapiro shows how the leftists who dominate the universities-from the administration to the student government, from the professors to the student media-use their power to mold impressionable minds.Fresh and bitterly funny, this book proves that the universities, far from being a place for open discussion, are really dungeons of the mind that indoctrinate students to become socialists, atheists, race-baiters, and narcissists.