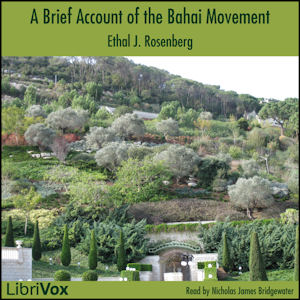 Download or Stream instantly more than 55,000 audiobooks.
Listen to "A Brief Account of the Bahai Movement" on your iOS and Android device.

"Many believe that we, in this century," writes Ethel Rosenberg, " are witnessing the dawn of a new spiritual epoch or era. A renewal of the Spirit is making itself felt in the Churches and in the religious and social life of all lands. This is in harmony with the teachings of the Bahais, and of their Great Leaders, now represented by Abdul Baha the 'Servant of God,' known to the outside world as Abbas Effendi. Once again, the Light is shining forth from that land which may indeed be called the Holy Land: for have not its valleys and hills been trodden from the beginning by the feet of those great Messengers inspired of God-Abraham, Elijah, and last and greatest, Jesus of Nazareth? Is it strange that once more in this century of ours, in this 'cradle of the race,' those that were sitting "in darkness have seen a Great Light," the light of the Sun of Righteousness that rises with healing in his wings?"

Ethel Jenner Rosenberg (1858-1930) was a prominent British Bahá'í, having been introduced to the Bahá'í Faith in 1899 by Mary Thornburgh-Cropper. She published two booklets on the Bahá'í Faith, of which "A Brief Account of the Bahai Movement" was one. She also presented a paper on the Bahá'í Faith at the International Congress for the History of Religions in 1908. She assisted Laura Clifford Barney in compiling Some Answered Questions and Lady Blomfield in compiling Paris Talks. She began to learn Persian and assisted Shoghi Effendi, the Guardian of the Bahá'í Faith, in translating the Hidden Words of Bahá'u'lláh. She was described by Shoghi Effendi as 'England's pioneer worker'. (Introduction by Nicholas James Bridgewater)