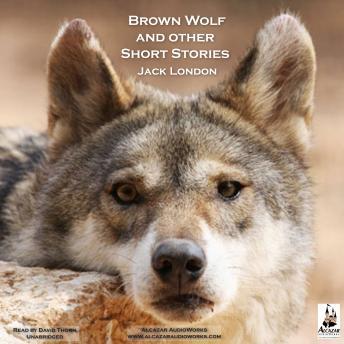 Brown Wolf and Other Stories

Download or Stream instantly more than 55,000 audiobooks.
Listen to "Brown Wolf and Other Stories" on your iOS and Android device.

Western writer and historian Dale L. Walker writes, ""London's true métier was the short story ... London's true genius lay in the short form, 7,500 words and under, where the flood of images in his teeming brain and the innate power of his narrative gift were at once constrained and freed. His stories that run longer than the magic 7,500 generally—but certainly not always—could have benefited from self-editing."" London's ""strength of utterance"" is at its height in his stories, and they are painstakingly well-constructed.

Brown Wolf and Other Stories includes four of Jack London's most fascinating tales:

AUTHOR
Jack London
John Griffith ""Jack"" London (1876–1916) was an American novelist, journalist and social activist. Born and raised in the San Francisco Bay Area, London traveled extensively as both a hobo and sailor creating a enormous body of experience to draw on as a writer.

London spent a great deal of time mining for gold in Alaska, to the detriment of his health, but inspiring the works that brought him the greatest fame."