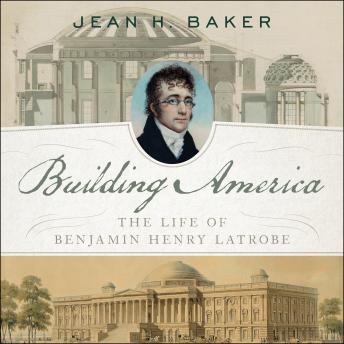 Download or Stream instantly more than 55,000 audiobooks.
Listen to "Building America: The Life of Benjamin Henry Latrobe" on your iOS and Android device.

An English emigre who became America's first professional architect, Benjamin Henry Latrobe put his stamp on the built landscape of the new republic. Latrobe contributed to such iconic structures as the south wing of the US Capitol building, the White House, and the Navy Yard. He created some of the early republic's greatest neoclassical interiors, including the Statuary Hall.

As a young man, Latrobe was apprenticed to both a leading architect and civil engineer in London, studied the European continent's architectural and engineering monuments, worked on canals, and designed private houses. After the death of his first wife, he was bankrupt and emigrated to the United States in 1796 to restart his career. For the new nation with grand political expectations, he intended buildings and engineering projects to match those aspirations. Like his patron Thomas Jefferson, Latrobe saw his neoclassical designs as a way to convey American democracy. He envisioned his engineering projects as a way to unite the nation and improve public health.

Building America masterfully narrates the life and legacy of a key figure in creating an American aesthetic in the new United States.