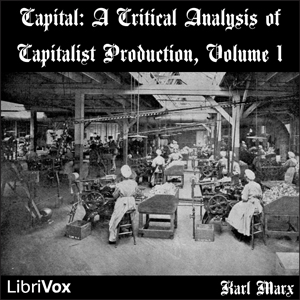 Download or Stream instantly more than 55,000 audiobooks.
Listen to "Capital: a critical analysis of capitalist production, Vol 1" on your iOS and Android device.

Capital, Volume I is the first of three volumes in Karl Marx's monumental work, Das Kapital, and the only volume to be published during his lifetime, in 1867.

Marx's aim in Capital, Volume I is to uncover and explain the laws specific to the capitalist mode of production and of the class struggles rooted in these capitalist social relations of production. Marx said himself that his aim was "to bring a science [i.e. political economy] by criticism to the point where it can be dialectically represented", and in this way to "reveal the law of motion of modern society". By showing how capitalist development was the precursor of a new, socialist mode of production, he aimed to provide a scientific foundation for the modern labour movement. In preparation for his book, he studied the economic literature available in his time for a period of twelve years, mainly in the British Museum in London.(Summary by Wikipedia)