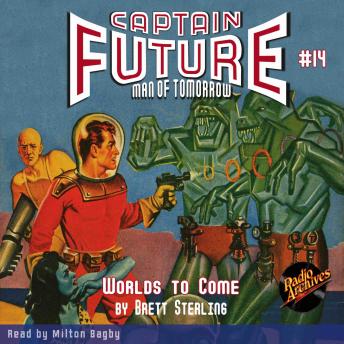 Download or Stream instantly more than 55,000 audiobooks.
Listen to "Captain Future #20 The Solar Invasion" on your iOS and Android device.

Edmond Hamilton is credited by many as the creator and writer of Captain Future. Although he is most responsible for nearly everything in the Captain Future tales, the idea was originally presented to him by Science Fiction editor Mort Weisinger. Also, Hamilton did pen the majority of the stories, but Joseph Samachson also wrote two Captain Future stories and Manly Wade Wellman wrote one. Five of the Captain Future tales carry the byline 'Brett Sterling', which was a house name used for a while that both Hamilton and Samachson wrote under. Protecting the universe is not a job that Captain Future and the Futuremen can do alone. The Planet Police, a far reaching organization of law enforcement officers patrolling the solar system, work with Curtis Newton in many of his adventures. Marshal Ezra Gurney is a forty year veteran of the Planet Police, able to remember when law was not widespread. Joan Randall is also a member of the organization, an officer in the elite Planet Patrol. Both Gurney and Joan, however, are considered assigned to work with Captain Future on special duty and are often identified with the Futuremen Mystery is an element of many of the Captain Future stories. Curt Newton and the Futuremen are often faced with not only saving an alien race or preventing planetary destruction, but also learning who is behind the latest evil deed or how it is being done. Clues are left and facts are shared with readers, making the final solution believable and exciting, letting them reveal the bad guy right alongside Captain Future. Rocket into science fiction adventure and discover new worlds. Ripped from the pages of the Fall 1946 issue of Captain Future magazine, "The Solar Invasion" is read with wonder and excitement by Milton Bagby.