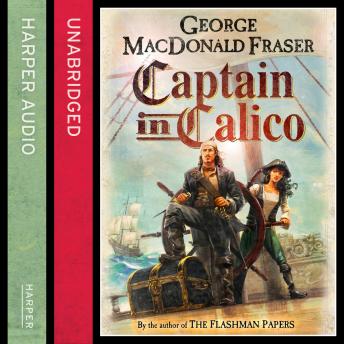 Download or Stream instantly more than 55,000 audiobooks.
Listen to "Captain in Calico" on your iOS and Android device.

New Providence, 1720s. When infamous pirate Captain 'Calico' Jack Rackham returns from the high seas to ask Governor Woodes Rogers for a royal pardon, the Governor sees his chance to put his own devious plans into action.

Their agreement sets off an adventure of betrayals, counter-betrayals, plots and escapes that see Rackham join forces with the scheming but seductively beautiful pirate, Anne Bonney.

Captain in Calico is a wonderfully spirited and entertaining novel, which will delight fans of George MacDonald Fraser. The unscrupulous Captain Rackham is pure pleasure, and shows the author's early penchant - and flair - for writing scoundrels of the highest order.