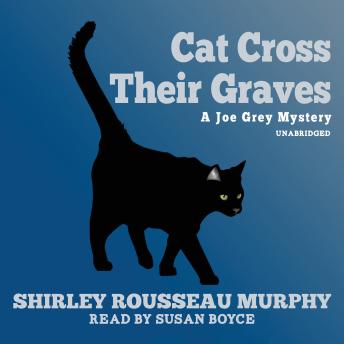 Download or Stream instantly more than 55,000 audiobooks.
Listen to "Cat Cross Their Graves" on your iOS and Android device.

The beautiful, serene village of Molena Point,California, is the type of place where people go to get away from the harsherrealities of life--which is what attracted classic film star Patty Rose to buythe village inn and settle down to enjoy her golden years. But as the towngathers to celebrate and honor the beautiful, aging actress with a festival ofher old films, Patty is brutally murdered--to the horror and shock of thispeaceful burg.
A gentle tortoiseshell cat, Kit, has been enjoying a retreat tothe animal-loving actress' inn, where she's spending time with her felinefriends Dulcie and the slick tomcat sleuth Joe Grey. But her relaxation is cutshort when she hears the gunshots that end Patty's life and sees her dead bodysprawled on the inn's front steps. She glimpses the killer racing into theparking garage and soon follows his trail.
Joe and Dulcie must now follow thenaïve Kit's trail and keep her from getting into serious trouble. To complicatematters, Joe discovers that Dulcie has been hiding a runaway child--one of thelucky humans that these special cats choose to talk to--who has now beenkidnapped, likely by the same man who killed their famous friend. When theshocking discovery of hidden graves raises the stakes even further, theinquisitive feline trio will have to work quickly to claw out the truth and endthe nightmare that has the devastated community reeling.