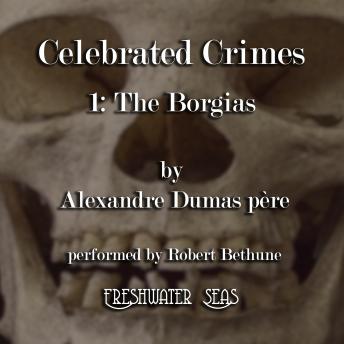 Download or Stream instantly more than 55,000 audiobooks.
Listen to "Celebrated Crimes 1: The Borgias" on your iOS and Android device.

In this, the first of the series, Dumas tells the luridly sexy, amazingly violent, and strikingly amoral story of the three most famous members of the Borgia family - Pope Alexander VI, Lucrezia, and above all Cesare. Never one to allow a mere fact to stand in the way of a good story, Dumas puts all the most sensational accusations made against the Borgias--mostly by their enemies--to the fullest use, which certainly distorts history, but makes for a great tale. Also, he often takes the novelist's approach, giving us details of scenes for which there is no historical record--we are given, for example, a wonderful description of the look on Cesare Borgia's face as he breaks out of his Spanish prison, something not even Cesare himself could have seen, and he was alone at the time. Again, as the translator notes, "The careful, mature reader, for whom the books are intended, will recognize, and allow for, this fact." We're reading Dumas here, not Tuchman or Toynbee.

Dumas gives us a sweeping tale of simony, betrayal, connivance, conquest both military and sexual, and above all death - on the battlefield in war, on the streets in brutal murder, in the dark by strangulation, at the table by poison. It is a tale of events and personalities that shook Europe and created the modern myth of the Renaissance prince, so well described by Machiavelli.

Note: The modern reader will see that certain passages in the book are marked by unmistakable anti-Semitism. As it is both useless to deny, and worthwhile to remember, that anti-Semitism was a cultural norm in Dumas' times, those passages have been left as written.