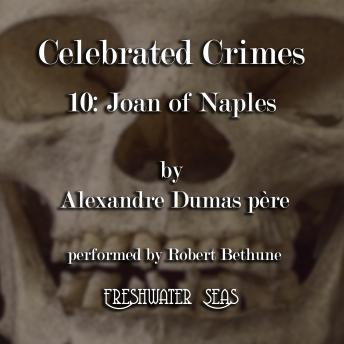 Download or Stream instantly more than 55,000 audiobooks.
Listen to "Celebrated Crimes 10: Joan of Naples" on your iOS and Android device.

To paraphrase the note from the translator, The Celebrated Crimes of Alexandre Dumas père was not written for children. The novelist

has spared no language—has minced no words—to describe violent scenes of violent times.

In this, the tenth of the series, Dumas places us at the court of Joan of Naples, a beautiful, emotional, highly capable woman at the

center of thirty years of plotting, betrayal, intrigue, war, beauty, love and death. Hers is a world at war between both secular and

ecclesiastical centers of power: the Pope at Avignon, the king in France, the emperor in Germany, and most importantly for her story,

the kings of Hungary, so far away in culture and temperament, so close across the Adriatic Sea. Personal, political and social forces

lead to her connivance in the death of her husband, forces which eventually lead to her own death as well.

This is the world that Niccolo Machiavelli knew so well and described so precisely: a world where networks of competing interests

writhe and clash, where enemies become friends and friends become enemies with startling speed, where the highest courage and the

basest cowardice can combine in the same person.