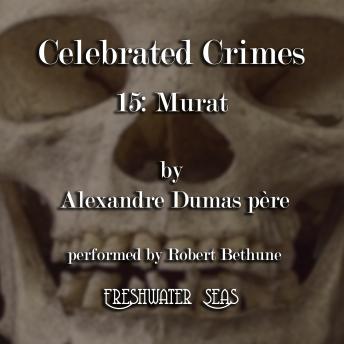 Download or Stream instantly more than 55,000 audiobooks.
Listen to "Celebrated Crimes 15: Murat" on your iOS and Android device.

In this, the fifteenth of the series, Dumas, the novelist-historian, brings his story-telling skills to a subject famous at the time, but less so now: Joachim Murat, the brother-in-law of Napoleon Bonapart, who established him as King Joachim the First of Naples.

Joachim is nothing if not an attractive, indeed romantic, hero. A man of extraordinary courage, instrumental in at least three of Napoleon's greatest victories; a man loyal to a fault to his friends, tender and loving to his wife and family, yet also a man of boundless ambition. His courage drove him to greatness; his ambition brought about his fall.

Dumas has one focus throughout this series: great crimes. As we progress through this story, we begin to wonder: where's the crime? We have derring-do, we have intrigue, we have hairbreadth escapes, we have great dangers, both from the forces of nature and from the hands of man, but we have no crime. That is, until we reach the very end, and then we have a monstrous act indeed, done by the orders of the highest of royalty.

Of course, Dumas, the dramatist and novelist, cannot help embellishing the work of Dumas, the historian. He gives us words and actions that cannot possibly be part of the historical record from scenes that are as effectively histrionic as they are undocumented. However, all his melodrama is well based on his history, and he certainly makes a wonderful tale out of his materials.